The History of A.B. Chase Pianos

Allen B. Chase founded the A.B. Chase piano company in 1875. Located in Norwalk, Ohio, the company spent their first decade in business producing organs, before making the transition to producing mostly pianos. In 1922, the United Piano Corporation acquired A.B. Chase, and a long road of fluid ownership ensued. 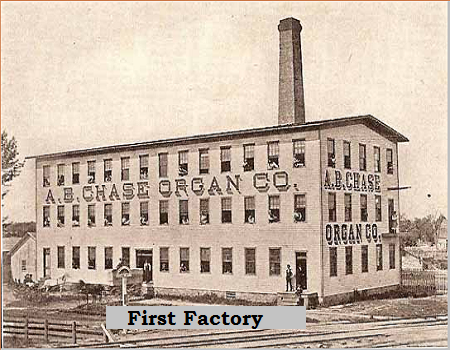 In 1985, the Aeolian-American Corporation filed for bankruptcy and production of A.B. Chase pianos ceased. It is important to note; however, that in 2001, an American-based company called Musical Properties, Inc. purchased the A.B. Chase brand with plans to reintroduce them into the piano market. [1]

Pianos bearing the A.B. Chase name are absolute American treasures and have been beloved by musicians for well over a century. Allen Chase prided himself on the fact that each of the pianos bearing his name took two full years to make, and were made of only the highest quality materials available. Chase once stated that no material was too good, and no skilled labor too expensive if it improved an A.B. Chase piano. Absolutely no costs or considerations were spared in the production of these fine instruments. 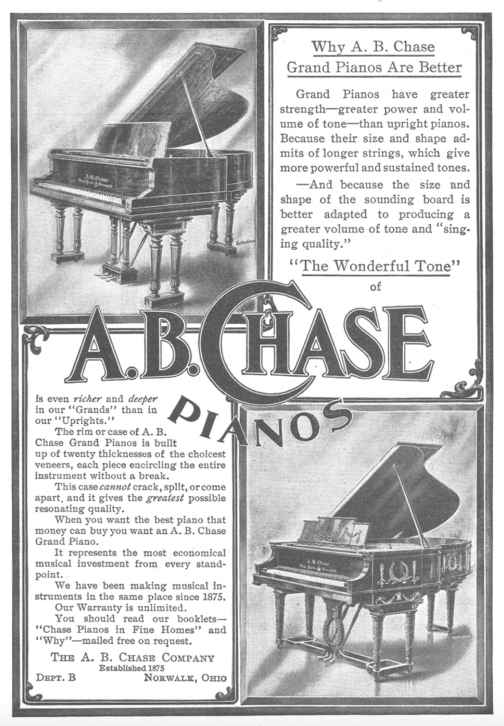 A.B. Chase pianos were produced in both upright and Grand styles, as well as player pianos. Both styles were very high grade and produced a clear, melodic tone. At a time when many pianos lines were being mass-produced, A.B. Chase refused to conform, and thousands of pianists have reaped the rewards of his patience and dedication to “only the best”. [2]

A.B. Chase pianos are absolutely worth restoring - almost without exception. The midpoint market price for a resorted upright can range, while restored Grand’s can sell for anywere between $10,000 to $20,000+. It is important to note that pianos produced between 1875 – 1922 command the highest value when restored, although later models are very valuable as well. [3]

Lindeblad specializes in restoring high grade, antique pianos such as pianos bearing the A.B. Chase name. If you have an A.B. Chase or other antique pianos that you are considering restoring, please contact us. One of our many piano experts will gladly walk you through the piano restoration process and answer any questions you might have. Call today!