The History of Aeolian American Pianos

Perhaps the most recognizable name in the piano industry during the 1900s, the history of the Aeolian piano brand began in the 1860s in Connecticut. William B. Tremaine started a piano business in 1868, with his brothers called the “Tremaine Brothers.” He helped engineer and go to market with the “orguinette” which by 1883, had evolved into the well-known Aeolian organ, a table-top organ for in-home play. [1]

He acquired several organ companies in Boston and founded the Aeolian Organ & Music company in 1888. Soon thereafter, he introduced the “Aeriola,” the self-playing piano organ hybrid and the precursor to the automatic playing piano that would drive Aeolian’s success as a company - the Pianola. [2]

By 1898, William’s son, Harry B. Tremaine, had taken over the business, changed the name to the Aeolian Company, moved to Worcester, Massachusetts, and was seeking capital investment to take the company to the next level. Having acquired patents for the automatic appliances for their musical instruments, Tremaine commissioned four full-page, color ads in a magazine to announce the Pianola.

By 1903, the company had acquired several organ and piano companies, including George Steck & Co., Weber Piano Co., and others. This was a pivotal move towards increased control of the industry with piano player factories in New York City, Garwood, Meriden and the Steck and Weber piano factories in Gotha, Germany and Hayes, England.

By 1932, Aeolian was sitting at the top of all piano companies with more capital invested in the company than the rest of the entire piano industry at over $15 million. That same year, Aeolian merged with the American Piano Company to become the Aeolian American Corporation. Furthering their footprint as one of the largest piano and player piano producers in America, the Aeolian American Piano Company controlled many piano names still found today (see below). [3] 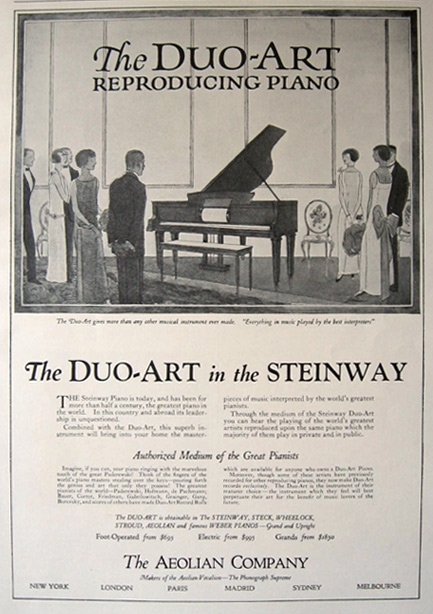 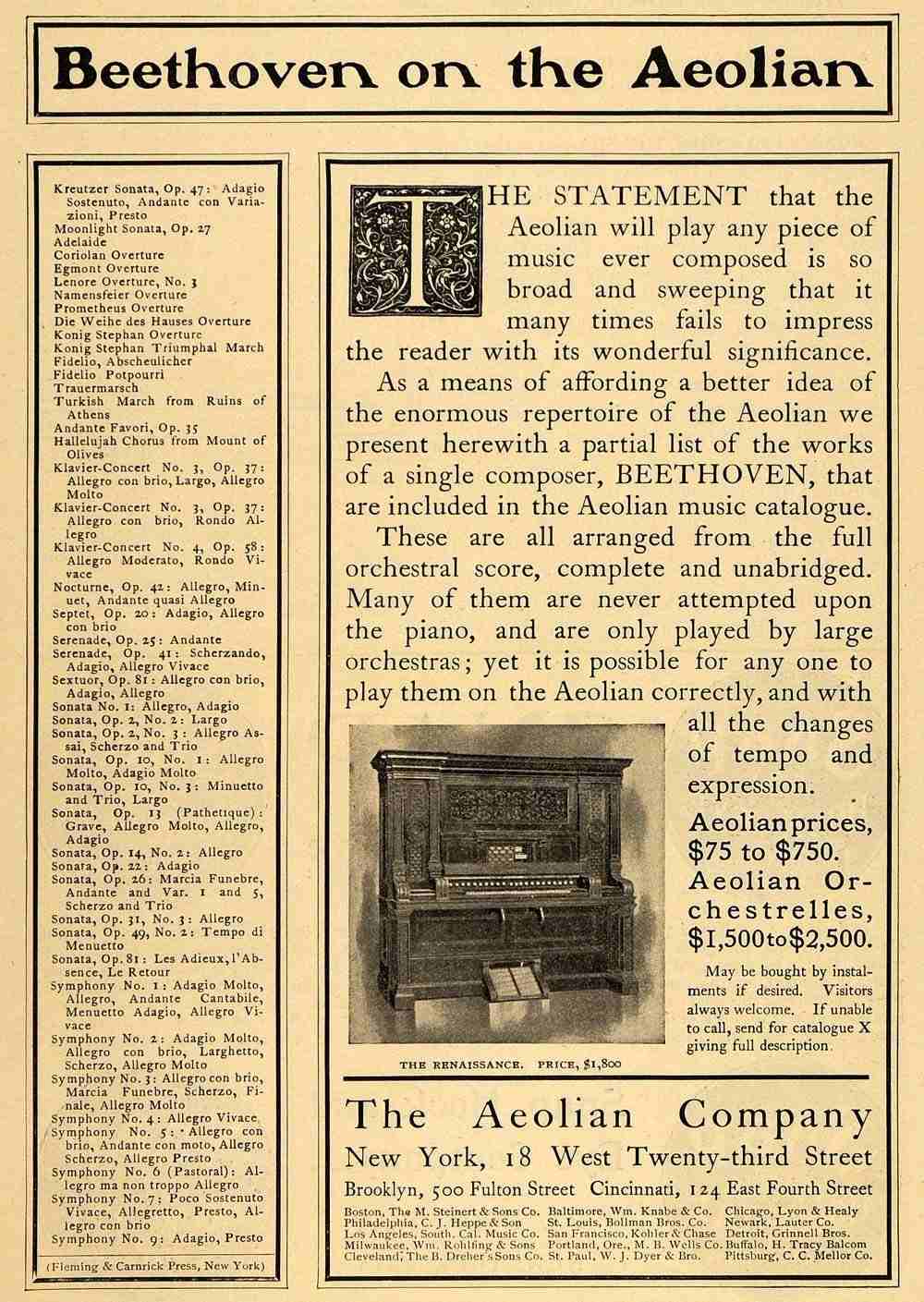 When ownership of the company passed from Tremaine to the Heller family, owners of Winter & Co. pianos, in 1959, the name was simplified to the Aeolian Corporation and a new plant was opened in New Brunswick for sourcing wood materials and parts. The footprint of the company expanded when the company was sold in 1983 to former Steinway president, Peter Perwz. By 1985, factories were beginning to close, and all the company’s assets were sold to various existing piano manufacturers by 1989. In 2001, Gibson Guitars purchased the Baldwin Piano Co. and reintroduced the Aeolian name for some of their pianos. [4]

What’s the difference between Aeolian and Aeolian American pianos?

This is a common question we are asked many customers who are familiar with both names and are confused by the relation and the significance of both names. While many pianos are known as simply “Aeolian” pianos, many are specifically notated as “Aeolian American” pianos. This is simply a product of the company name at the time of production.

Aeolian has been a word used in the name of the company since the very beginning when Tremaine founded the Aeolian Organ & Music Company. This common denominator has remained while the other parts of the name have changed based on mergers and acquisitions. Below is a timeline notating the evolution of the name:

Many people wonder if the quality or value of the pianos varied with the name changes. For instance, “is an Aeolian piano worth more than a piano produced by the Aeolian American Corporation?” In general, the answer is “no.” The company’s factories and manufacturing standards changed over time with mergers and acquisitions, but there was not a golden period of better quality pianos produced by the company. 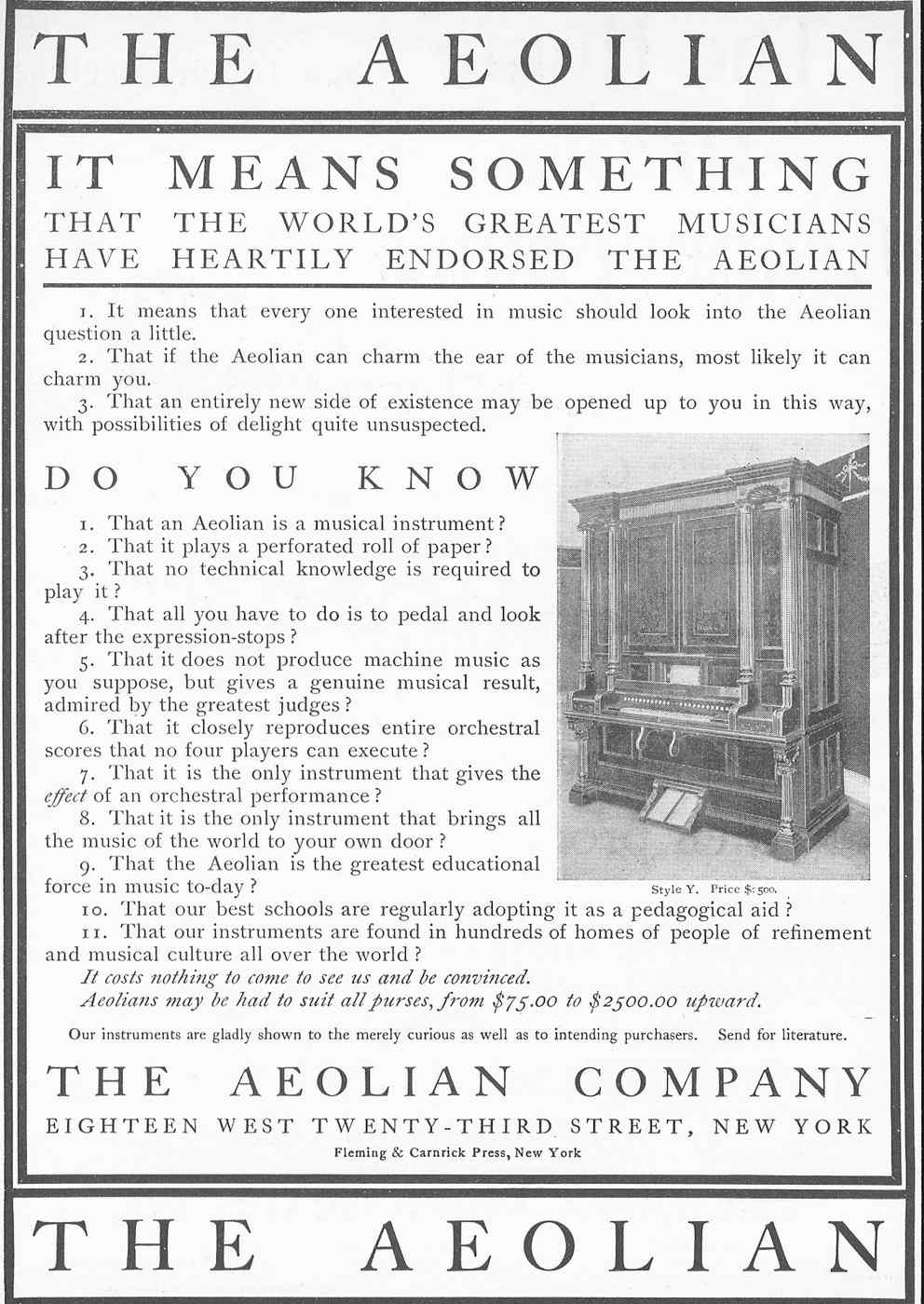 As the fourth-largest piano producer in America in the 1940s, the Aeolian Corporation controlled many piano brands throughout the 1990s. [5] The list of names that were produced by Aeolian during this time is extensive, and can be found below: 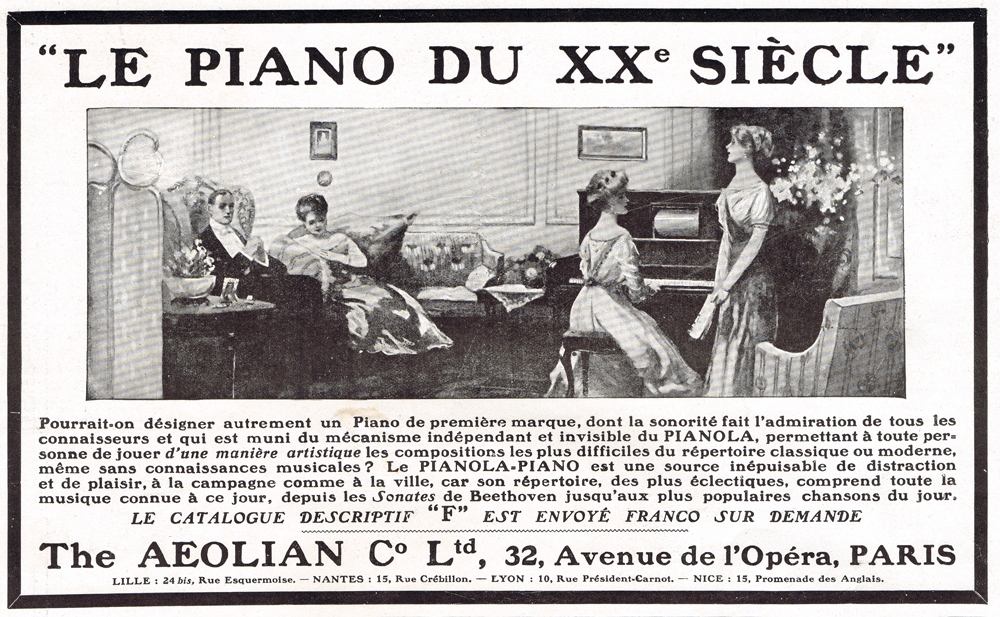 Restoring a Piano made by Aeolian & Aeolian American Pianos

Knowing that your piano brand was made by Aeolian can be a tricky, given the many different piano names and brands they produced throughout the 20th century. Additionally, assigning the value depends on the year, make and model, given the various factories from acquired companies that were contributing to Aeolian’s production. [6]

As a general rule of thumb, pianos produced by Aeolian in the mid-1900s range in unrestored value. While some of the better-known and more value brands like Steck, Chickering and Weber can be exceptions, many Aeolian’s found today are considered middle-tier pianos in quality, tone and value.

For a consultation on the benefits of restoring your Aeolian brand piano, contact us today!