Sohmer and Company was founded in 1872 when Hugo Sohmer and Joseph Kruder bought out the Marshall and Mittauer piano factory located in Long Island, New York. [1]  Known for producing high-quality, long-lasting pianos, Sohmer was the piano preferred by President Calvin Coolidge and well-known composers Victor Herbert and Irving Berlin. [2] 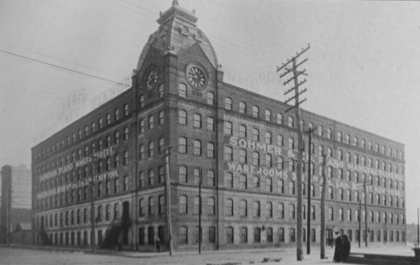 Sohmer and Co. was one of a handful of American piano manufacturers to survive the Great Depression, and remained family-owned through most of the Twentieth Century. Hugo Sohmer’s son, Harry, took over the company and eventually passed it on to his sons, Harry Jr. and Robert Sohmer. 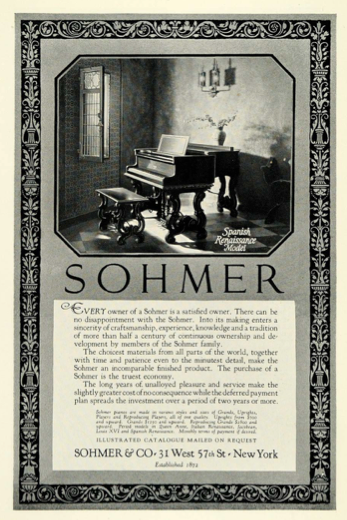 In 1982, Harry and Robert Sohmer sold the family’s company to Pratt Reed and Co. At the time, Pratt Reed was the largest American manufacturer of pianos, and the Sohmer offices and factory were moved to Ivoryton, CT. [3] In 1986, Pratt Reed sold Sohmer to Robert McNeil, and the factory was moved to Elysburg, PA. Falcone Piano Company, which was later absorbed into Mason and Hamlin Corp., purchased Sohmer from Robert McNeil in 1989. When Mason and Hamlin declared bankruptcy, a company by the name of Music Systems Research purchased their assets. In 2003, Korean-based Samick Music Company released a Sohmer piano line that is currently manufactured in Korea. [4]

Even though Sohmer and Co. has changed ownership many times over the last several decades, many consider the pianos made today under the Sohmer name to be high-quality and reminiscent of the Sohmer Pianos of old. Continuity in quality is just one of the reasons that these fine pianos were, and are, so popular.

This well-known piano manufacturer was the first to sell a five-foot baby grand, and they laid claim to many patents for designs such as the agraffe bars and actions, an agraffe for a quadruple strung reverberation scale, and bridge agraffes, among others. Sohmer produced both upright and grand pianos that are known for their unique “round, hollow, woody, and dark” sound, as well as squares and player pianos. [5] 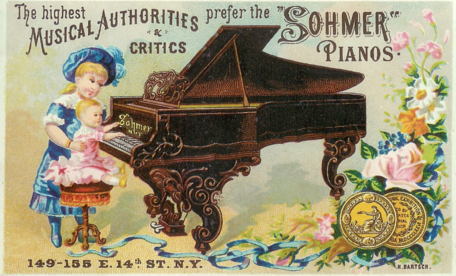 One of the hallmarks of Sohmer pianos is the use of elaborate woodwork and design elements. These features differentiate Sohmer pianos from other American-made pianos and continue to help set the instruments apart even today.

Because Sohmer pianos were built with such attention to detail and fine craftsmanship, many have stood the test of time and are still in use. Known as the “poor man’s Steinway”, Sohmer pianos, and especially grands, are worth restoring. [6] Contact Lindeblad today and let us show you how we can bring your piece of American history back to life.