Charles M. Stieff came to American from Germany in 1831, and in 1841 he began to sell pianos imported from Europe. [1] The Charles M. Stieff piano company was founded in Baltimore, Maryland in 1842, [2] after Charles toured Europe studying pianos, and decided to begin producing his own line. 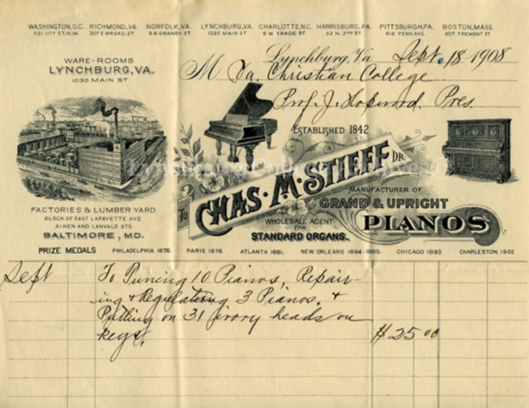 Charles Stieff’s eldest son, John, eventually took over the company and it grew tremendously under his stewardship. In 1876, John sold his portion of the company to his brothers. [3] The Stieff company not only produced their own line, but the Bennett-Bretz, Davies & Sons, Leslie Brothers, and Shaw lines as well, and enjoyed a decent amount of success for many decades. Unfortunately, the company liquidated in 1951, after more than a century in business. [4]

Charles M. Stieff was known as an upstanding businessman who produced pianos of excellent repute and of the highest order. Produced in both Grand and upright styles, Stieff instruments were known throughout the industry as durable pianos with incredible longevity. [5]

Charles M. Stieff pianos are almost always worth restoring, even if a great deal of work is needed. Depending on the model, a Steiff grand can be worth as much as $60,000 when fully restored. Aside from the monetary value of Stieff pianos, they are a storied part of American music history, and owning one is akin to owning a rare piece of a time gone by. If you own a Stieff piano, please contact Lindeblad to discuss the restoration process. We would relish the chance to help you bring your antique piano back to life.