Perhaps the most well-known piano brand for its high-end quality and family name, Steinway & Sons’ company history began in Germany when Heinrich Steinweg owned a music store in Seseen. After coming to the U.S., the family changed their name to Steinway and established Steinway & Sons in 1853, at their original location on 85 Varick Street, N.Y. [1]

By 1854, the company had grown rapidly and expanded to a new location that would top the charts as the largest piano factory in the world at the time. Around the time of the Civil War, the company took a downturn but was quickly revived by the opening of Steinway Hall in 1866, becoming the hub for the arts in New York for nearly 30 years until Carnegie Hall opened.

Opening a factor in Hamburg, Germany, in 1880, Steinway & Sons operated out of two main locations: Germany and New York. A series of buyouts resulted in the renaming to Steinway Musical Company, which is now owned by a private equity firm headquartered in New York. Steinway & Sons, Boston and Essex pianos continue to be manufactured today. [2] 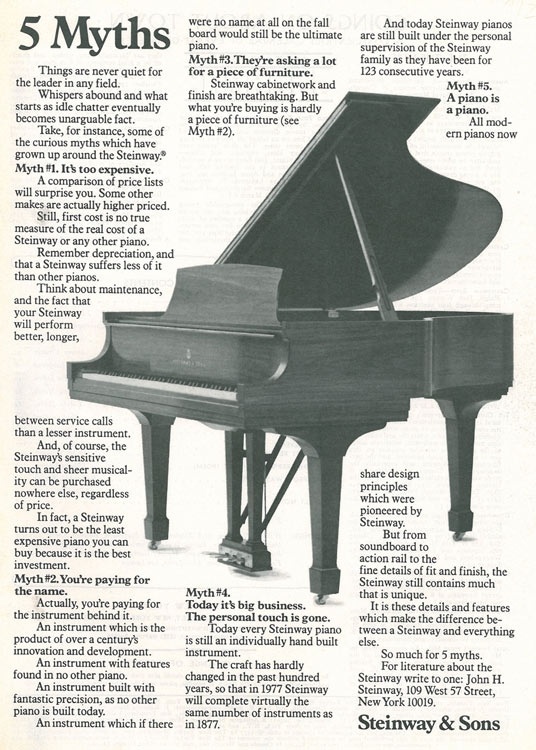 There are many different models of Steinway & Sons pianos. Varying in size and character, certain Steinways are designed for the concert stage, whereas others ideal for the home or studio.

Steinways are known best for their grand and baby grand pianos, which they have coined “studio grands.” Several of the models have gone in and out of production, most notably the Model “O” is now the replaced with the Model “L,” and the Model “A” was discontinued in the 1940s, and reintroduced in recent years.

For a full list and description of Steinway & Sons piano models, visit our Steinway page.

As a leader in piano manufacturing since the early 1800s, Steinway & Sons has contributed to many evolutions of piano technologies. Some of these technical developments include the following innovations [3]:

H2: The Value of a Restored Steinway Piano

Because of the rich American history and the prominence of the brand dating back to the early 1800s, Steinway & Sons pianos have retained a high value. Particular early models produced in the various New York and early German factories can be worth up to $25,000 unrestored.

Lindeblad specializes in the repair and restoration of Steinway pianos. For decades, our family has been dedicated to learning the Steinway piano brand, its characteristics and its premium material qualities. A restored Steinway’s value can increase to anywhere between $25,000-100,000.

Contact us today to learn about the value of your Steinway piano.