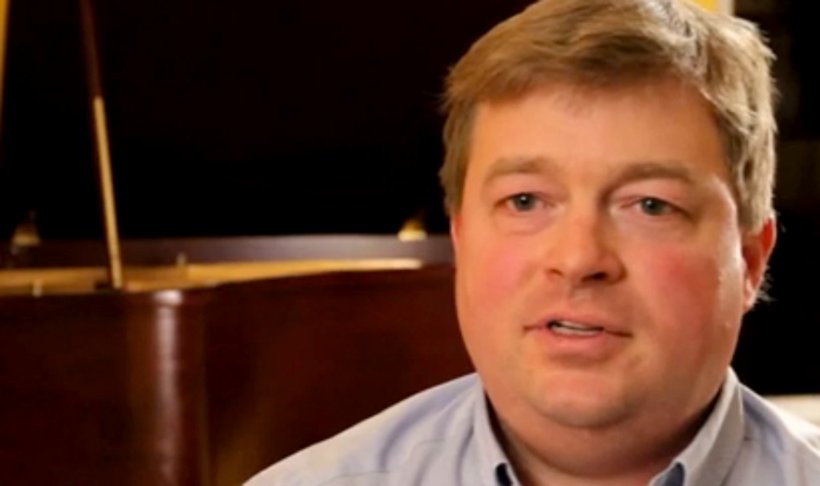 I wanted something high quality, not like a cheap Korean or oriental piano. I wanted something really good. The prices for new ones in that sort of quality range were just astronomical. There was an old Knabe listed on Craigslist and I went to see it. It was in Seattle, and I played it and I gave the lady a check for it.

I did some research into companies around here that could restore it, and I went and played pianos that they had, and I didn't really like any of them. They were OK, but they were all lacking something. Then I looked on the internet and just a search for piano restoration, and Lindeblads came up with a bunch of other companies. And I one by one picked through them and called them.

And something just felt right about doing business with them. They were very responsive on the phone, they were patient, they answered all my questions. I have to admit, I questioned sending a piano across the country 3,000 miles to get it restored and then another 3,000 miles back. But in retrospect I would do it again in a heartbeat. It was absolutely the right decision and they just did a phenomenal job.

The action work that they did is amazing. It's just you can get it to do what you want. You can be expressive with it. Everything about it I love. I was absolutely thrilled the day it came. It's been here about six weeks now. After having played it that long, I'm every bit as thrilled with it and more than when it came. So it just keeps getting better.

I've played a lot of higher end pianos trying to find this one, and I went to dealers. I probably played 200 different ones. And I like this better or as well as nearly any of them. There was a Steinway that I loved, a European Steinway, that was as good, I think. But this is certainly of that caliber. I mean it's that good of a piano now. It wasn't when I had it shipped, but it sure is now.

Paul and I talked about a number of things. One is the tone. I wanted a tone on the brighter side of the scale, so not fuzzy, not cold, but definitely bright and brilliant, because I play a lot of fast music, a lot of Bach, a lot of Mozart, and things where the muddy tone wouldn't be appropriate. And I just like the way a bright tone sounds. So we talked about that, and I got exactly what I asked for. I mean it couldn't be voiced better for my taste.

We also talked about the touch, and I like a piano that's got a firm keyboard that feels a lot like a Steinway action. And even though this isn't a Steinway piano, it feels like one. And I actually like the tone better than most of the Steinways that I've heard. It's got a wonderful warm and resonant tone. And that combined with the good feel of the action's just remarkable.

The action was one thing that I was concerned about because it would be easy enough to get everything else right and not have that like I wanted it. It's also something that's hard to describe to someone else. But they listened and I was able to describe similar pianos and how they felt and how I play and what I use the piano for and the kinds of music that I play. And it all turned out just great. It's amazing. Worth every penny and then some.

I would gladly have paid more for what I got after seeing it. I mean it was I almost felt bad after seeing the job that they did for the amount that we paid, because I thought about how much the materials must cost and how much the time would take. And this has to be for them a labor of love because the job is impeccable that they did.