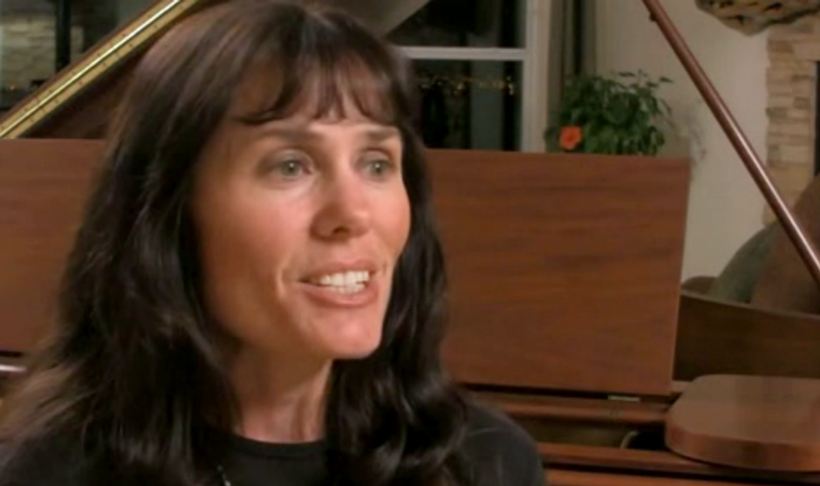 Ever since I was a little girl, I thought how neat it would be to have a grand piano. And I had a little grand piano music box, and I thought that would be so awesome to have a real grand piano some day. And we got to the point in our lives where we were actually ready to get one, and so I had looked and found a new grand piano that I had pretty much decided on.

I ended up talking to a guy that works for Lindeblad pianos. He was in New Mexico, he was home for a little while, and I asked him don't you work on pianos or something? And he said, yes. And I said, well, I'm thinking about getting one and I have this one in mind. What do you think? He was all enthusiastic, and he said, no, don't get a new piano. That would be a big mistake. And he said, the vintage restored pianos are so much better built and they have such a higher quality and you'd be making a big mistake to get anything else.

He started telling me all about what they do at their shop and how they restore them. He was telling me about the casing and the sound board and about the pin block and what all they do by hand and the precision that they use. He told me all about the parts of the keys and the wippens and all these things that I didn't know anything about. And then he was explaining how that all comes together to make the tone of the piano, and how much more rich and full it is with one of the vintage restored pianos than with like a new piano.

So I got interested in that and it kind of went from there. It was a little bit disconcerting to think about spending that much money on something that I hadn't seen or played or anything. But talking to the Lindeblads, you could see what high ethical standards they had, and it was interesting. Every time I would have a question or something, they would get right back with me.

And once I did decide to do that, they were just helpful all the way through, and when I had questions about, say, for instance, the color of the piano, and I'd say whenever you guys have a chance I'd like to see some samples, but there's no rush. The next day I got a FedEx letter in the mail that had all the color samples.

At one point, Paul called me on the phone and he said, Shawna, we have your piano almost finished. Would you like to hear it? I said, oh yeah, that'd be great. And I was actually in my car at the time, and the kids were in the car. and I'm like pulling over and I said, kids you've got to be quiet for a second, please, I'm going to hear the piano. So I pulled over and I'm like listening, and he's playing the piano, and I was like oh, that sounds so wonderful!

I told Mariah he's going to send pictures of it, and Mariah, I'm so excited. She said, mommy, I don't understand why you're so excited about this piano. And I tried to explain to her about workmanship and about quality. And we have the opportunity of having a piano that's just like the best one in the world that we can play whenever we want to! Isn't that so exciting! And I told her, you're a little girl and you're going to get to play a piano like this! It's just amazing! And I think she understood as well as an 8-year-old could after that that there is a big difference in quality and workmanship, and that it really is a special thing to have a piano like that.

I wanted to make the wisest investment that I could. So that's when I called and I ended up talking to Todd, and I told him exactly what I wanted and what I was looking for and how I wanted it to sound and how I wanted the touch on the notes, everything. And he said, well, let me talk to my father and we'll check our inventory and I'll get back with you. He called back and said, I think we found everything you want in a Mason & Hamlin Model A.

And I still had all these questions and asked him all these things. And he was very patient and went over everything with me. He basically said this is the best we could get you for the price range that you're talking about.

I talked to my husband about it and we did some research. We kind of weighed the pros and cons. This piano would not only retain its value, but appreciate in value. And from all the indicators, it looked like it would have the best workmanship, the best tone, the best parts. And plus, we just kind of liked how the vintage pianos looked, because they look kind of unique and kind of bring a peaceful, nostalgic feeling.

I called Todd back and said, OK, we're a-go. And the whole plan originally was that once it was restored I would fly out to New Jersey, play the piano, make sure it looks good, everything checks out all right, and then have it shipped back to New Mexico. Well, a couple of months down the road it became evident that I wasn't going to be able to do that. That that wasn't going to work out.

So that's when another kind of wave of apprehension took over, and I felt like, wow, I'm buying this piano, I'm not going to be able to play it first. That's kind of scary. But every time I would talk to the Lindeblads on the phone, I just felt very reassured by them. And you could tell that they were very conscientious about the work they did. Always very helpful. And I would also get on the internet and look up their testimonial page, read through some of those, because I felt like if so many people were happy with what they did for them, surely they must be doing a good job.

So the third time I felt the most apprehensive was when it was time to ship it from New Jersey to New Mexico. That's over 2,000 miles. And it was in the middle of winter. So I remember the morning that it was supposed to arrive. I heard the truck come outside. And I literally ran to the door and busted outside, and then I was saying, hello! You can back it up right over here! I was very excited. You could tell that the movers were very experienced. They brought it right in like sideways, rolled it in, put the legs on, set it up, put it at just the right angle that I had requested.

I remember after everyone left and I was just sitting here with my piano, how it felt to play Fur Elise that first time. Because that was the song from my music box, and it was just incredibly peaceful and amazing to do that. It was just exhilarating. It was amazing. So much different than any other instrument I have ever played. And the tone was amazing. I had never played a piano with a more beautiful tone in all my life. I have never heard one that sounded that nice.

The message I really would like to get across to other people is that you really can trust the Lindeblads. I kind of took this risk and went through this process, and it ended up being that I was buying this piano sight unseen. And yet everything worked out beautifully. It worked out perfectly, as a matter of fact. And they are just experts at what they do. And I really feel like they would do whatever they could to try to get things exactly like you want them and to make you happy and to make you satisfied. You really can trust the Lindeblads to come through for you in every way.

Finding you and your family has been a joy for me â€“ I hope that we will stay in touch over the years and I know I will be calling you for anything I need done on the piano in the future â€“ even after I move to Arizona!