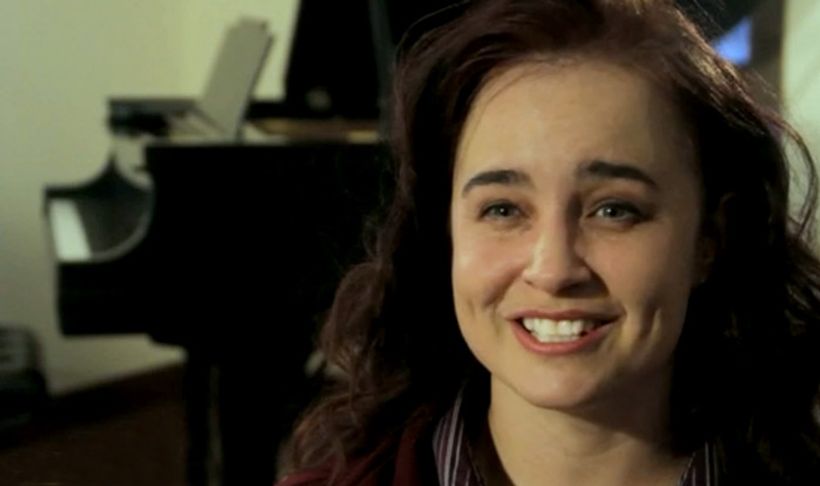 When we designed the living room in this house, we had a spot right here specifically designed into the house, because we knew that we wanted a grand piano in our home.

We had pianos in our homes growing up, and we both took piano lessons. However, it just was a hobby that fell by the wayside.

My mother was a piano teacher. I have no excuses.

The first thing that we did was Robert checked with local companies, local piano tuners, to find out if there was a piano locally that we could actually walk in and look at. And there just wasn't anything. We're very remote where we live. So the second effort to find a piano was driving about four hours away, went and looked at one in a person's home. We were nervous about it, had some cracks in the soundboard, and had some scratches on it. So we came back, and we decided that the internet would be our best option.

We researched Craigslists, eBay, the usuals.

One of the companies that we found on the internet was one that-- it was literally like he was trying to sell used cars in pianos. It was just kind of hokey. It just didn't sound very professional. He didn't sound very reputable.

Anyway, we found the Lindeblad piano website. As we talked to both Paul and Todd, just their feedback was amazing. They were very concerned that we would be satisfied. They were concerned about what we were looking for, and they wanted to meet our expectations.

They asked us questions about where we lived, what type of climate are you in. And that impressed on us that hey, these people want to make sure that the piano in the long run is taken care of.

We were very concerned about making such a large purchase over the internet without ever having seen the piano, or having seen their business, or how they do business. And to someone who's nervous about making that kind of purchase on the internet, I would say don't be with Lindeblad. They are amazing, and you will be very satisfied. And just don't even give it a second thought. Make the purchase as if it were just something that you were going down to the local piano store and doing. And I just would tell you don't have any fear at all.

They really took the extra steps to ensure that we had what we really wanted. There was a trust that was built without actually meeting them face-to-face. And their response after the fact, their follow-up to make sure nothing was wrong and it was exactly the way we wanted, reassured us that we did the right thing. This is one of the best internet purchases I've ever made. And it has just gone smooth as silk.

Our driveway is a third of a mile long and it rises 200 feet in elevation from the county road up to our house. So we were a little concerned about it flip-flopping back in the back of the truck. But the delivery people were excellent. They were very thorough. They knew what they were doing. We just had no problems with delivery at all, despite the fact that it came across the United States to get delivered to us.

These are good people. They do their business right.

We just kind of thought well, once it's here, it's ours, and good luck. You know? And instead, they've been very responsive about every question that we've had about it.

One of the reasons that we decided on a vintage piano, versus a new piano, is because we wanted something that had a history. The new pianos that we looked at didn't have any character. It didn't have a story to tell yet. And I think pianos really do have a story to tell, how it's been loved, and how it's been played, and enjoyed, and appreciated. So that's why we chose a vintage piano.