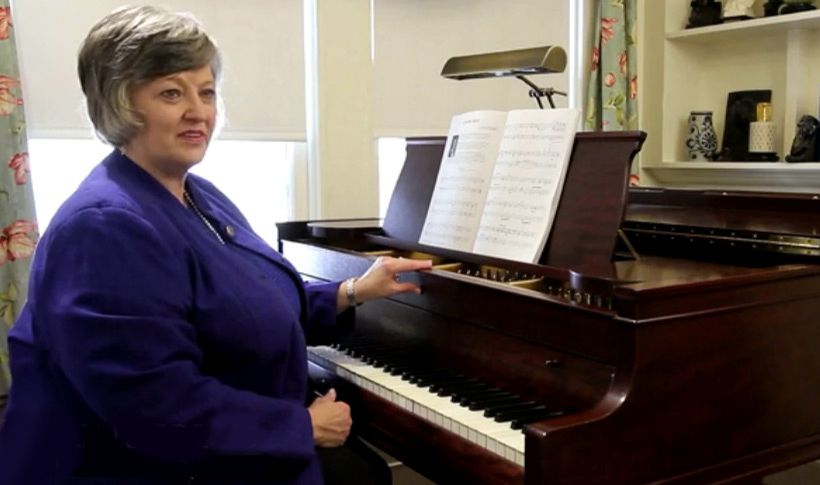 This piano's been in our family since my grandmother was 16. She was born in 1895. And then in 1910, 1911, for her 16th birthday, my great-grandfather told her to go to New Orleans to play pianos and select one. She was quite the musician.
And she played dozens of pianos and selected this beautiful Chickering African Mahogany. She put the piano on the train with her when she returned. Papa met her at the station and put the piano on the wagon and then took it down to Mansfield, which is now about a 30-mile drive Southwest of Shreveport.
And by the time I got it there were a few notes that I would play and I would kind of have to go oops. And the tuner would tune it, and he would say, Mrs. Joiner, this is not going to hold a tune. I heard I might have to have a new piano, I might have to have the holes re-bored, I might have to have a new harp poured. I might have to have all sorts of things, and I never knew who to trust. I never knew exactly what I should do. And yet I knew what I did had to be the right thing for this grand old lady.
My car was running fine, my piano wasn't. And so I was going to put the money into the piano. I had seen someone that had had a Lindeblad experience, and had sent the piano off and it came back just remarkable. I have new generations in the family who are going to be appreciating this for years, just as I did.
So I made this leap of faith to send the piano away to the frozen North with people I didn't know. And it was very traumatic. The piano movers came in, and I was concerned that they were going to look at the stairwell with the twists and turns up and go, I'm sorry, and the deal would be off, and I would wind up with a new car and a piano that still didn't play.
But they said, we can do this. They just instilled a great deal of confidence in me by the professionalism and the way they lovingly treated the piano. I knew that they had respect for the instrument. When you're making the investment, bite the bullet and do it right.
My ivories looked pretty good. I had a few chipped, but they restored these ivories and I am totally satisfied with the decision that I made. I said, I want to be here for the piano's homecoming. And so I took off the day, they brought it in, they set it up, and I sat and played for three hours after they left.
The first song I played was Amazing Grace because I kept thinking it's like amazing grace that we found these people. I wanted it to look like a lady who had little age on her, but was still beautiful. I wanted it to look like it was an antique that had been lovingly cared for. And indeed, that's what it does.
Mr. Lindeblad told me, he says, Mrs. Joiner, when this piano is restored you're going to see why your grandmother selected this one of all the dozens of pianos played. And I do.