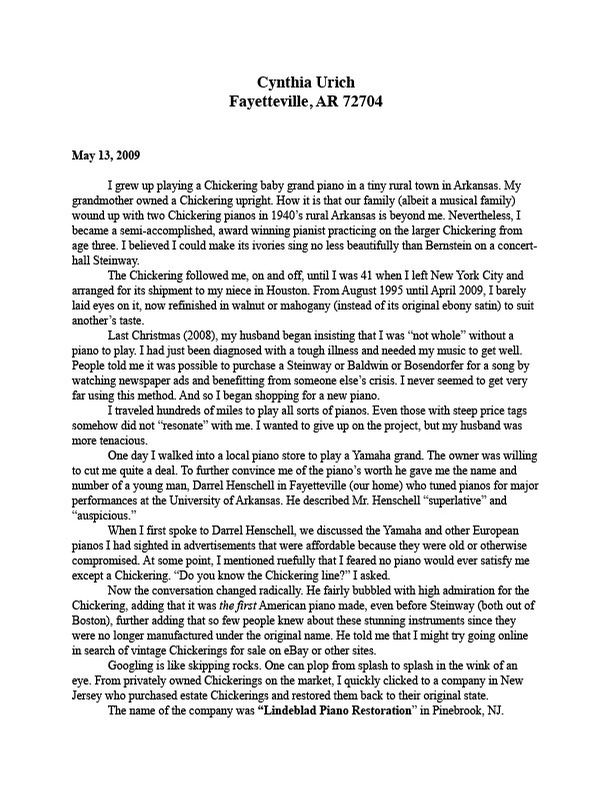 I grew up playing a Chickering baby grand piano in a tiny rural town in Arkansas. My grandmother owned a Chickering upright. How it is that our family (albeit a musical family) wound up with two Chickering pianos in 1940â€™s rural Arkansas is beyond me. Nevertheless, I became a semi-accomplished, award winning pianist practicing on the larger Chickering from age three. I believed I could make its ivories sing no less beautifully than Bernstein on a concert-hall Steinway.
The Chickering followed me, on and off, until I was 41 when I left New York City and arranged for its shipment to my niece in Houston. From August 1995 until April 2009, I barely laid eyes on it, now refinished in walnut or mahogany (instead of its original ebony satin) to suit anotherâ€™s taste.
Last Christmas (2008), my husband began insisting that I was â€œnot wholeâ€ without a piano to play. I had just been diagnosed with a tough illness and needed my music to get well. People told me it was possible to purchase a Steinway or Baldwin or Bosendorfer for a song by watching newspaper ads and benefitting from someone elseâ€™s crisis. I never seemed to get very far using this method. And so I began shopping for a new piano.
I traveled hundreds of miles to play all sorts of pianos. Even those with steep price tags somehow did not â€œresonateâ€ with me. I wanted to give up on the project, but my husband was more tenacious.
One day I walked into a local piano store to play a Yamaha grand. The owner was willing to cut me quite a deal. To further convince me of the pianoâ€™s worth he gave me the name and number of a young man, Darrel Henschell in Fayetteville (our home) who tuned pianos for major performances at the University of Arkansas. He described Mr. Henschell â€œsuperlativeâ€ and â€œauspicious.â€
When I first spoke to Darrel Henschell, we discussed the Yamaha and other European pianos I had sighted in advertisements that were affordable because they were old or otherwise compromised. At some point, I mentioned ruefully that I feared no piano would ever satisfy me except a Chickering. â€œDo you know the Chickering line?â€ I asked.
Now the conversation changed radically. He fairly bubbled with high admiration for the Chickering, adding that it was the first American piano made, even before Steinway (both out of Boston), further adding that so few people knew about these stunning instruments since they were no longer manufactured under the original name. He told me that I might try going online in search of vintage Chickerings for sale on eBay or other sites.
Googling is like skipping rocks. One can plop from splash to splash in the wink of an eye. From privately owned Chickerings on the market, I quickly clicked to a company in New Jersey who purchased estate Chickerings and restored them back to their original state.
The name of the company was â€œLindeblad Piano Restorationâ€ in Pinebrook, NJ.
I must interject here that â€“ in my research on Chickering pianos â€“ I was learning information Iâ€™d not known beforehand. In trying to guess what decade my childhood Chickering had been made (I was born in 1954, and the piano was well broken in by the time I began to play it in 1957), I googled â€œChickering Pianos â€“ 1940â€™s.â€ The threads of information led me to discover that the finest Chickerings were considered those produced between 1893 and WWII. I learned that Franz Liszt had owned and cherished a Chickering, despite his concert performances on the Steinway. I learned that Glenn Gould also had a fetish for the Chickering. I found a site on YouTube presenting a renowned elder piano teacher who had been asked to play a very old Chickering made in the late 1800â€™s. The man explained that he had agreed somewhat gratuitously to accommodate this request, expecting to find nothing more than an â€œantiqueâ€ piano ready for a piano mausoleum. Instead, he was startled to find a piano that, despite having not been tuned in half a century, was remarkable and resilient in every way. In the video, he sat down and began to play it with the sort of rare delight an accomplished pianist savors only when playing a magnificent instrument of singular resonance.
As if by coincidence, I kept coming across the year 1928 as being one of the finest vintage years (if not the finest) in the history of Chickering production. So, at the very least, I had pinpointed within a couple of decades the fact that the piano I played between ages three and 41 was probably a quality vintage Chickering made sometime around the end of WWII. The year 1928, however, stuck in my mind.
The day I discovered the Lindeblad web site, I was excited by the caliber of piano labels they restored â€“ mostly European. The Chickering, however, was also given top billing. I began scrolling through the site to see what Chickering pianos might be available for restoration. By this point, I was very particular: It would have been made before the end of WWII; a medium- to large-sized baby grand; and definitely ebony satin (not the high-gloss of modern pianos most people prefer these days).
How do I describe my disbelief when clicking to a new screen and suddenly beholding a 1928 5â€™10â€ Chickering built in an ebony satin cabinet â€“ only recently acquired from an estate in North Carolina! A piano so superior in its crafting that the original soundboard required no replacement! The soul of the piano is its soundboard; this pianoâ€™s would remain intact while thousands of other parts would be imported from Europe, exactly as each original part had been imported. The cabinet would be refinished, rubbed down by hand to its original subtle satin ebony luster. Even the keys would be restored with well preserved ivories hand-picked from among thousands collected in the Lindeblad warehouse.

I began to correspond with Paul Lindeblad and his son, Todd, by phone, email, and post.
We agreed on the terms: $5,000 down with a balance of $11,300 due upon completion in around three months.
On December 17, 2008, I received in the mail an elegant letter of receipt for the down payment, accompanied by an equally impressive publicity package describing in detail the companyâ€™s range of expertise.
On March 22, receipt of my check for the balance was acknowledged by email.
Twice that week, Mr. Lindeblad (Paul) phoned me to play the piano as it neared completion. We discussed voicing down the pianoâ€™s brightness before final tuning.
At some point, I cancelled a flight to New York, previously booked at my husbandâ€™s urging, to go up and play the piano myself for full and final reassurance that this particular piano did, indeed, produce the singular sound grooved indelibly in my brain.Q: Why would I cancel a personal encounter with such a valuable instrument before committing to own it, place it my home, and teach my daughter to play on it? A: Because I trusted my ear, I trusted Paul Lindeblad, and I trusted the Chickering.
On April 2, one week before my 55th birthday, Green Mountain Piano Moving service delivered the prize (compliments of Mr. Lindeblad). No other moving company would suffice by his standards, and he was proved right!
On April 9, one day before my 55th birthday, Darrel Henschell gave it the initial tuning, also compliments of the Lindeblad family. Needless to say, Mr. Henschell acknowledged Mr. Lindebladâ€™s work with highest praise. â€œPaul Lindeblad has done this perfectly,â€ were his exact words. I also received high praise for acquiring an instrument that, in appearance, quality, and sound, far exceeded its rather modest price. In other words,

I had procured something quite spectacular.
The symmetry of my lifelong journey with the Chickering piano is now complete. I am working on three piano solos: one by Ravel, one by Bach, and a third by Mussorgsky. Anna, my 14-year-old, having previously practiced only briefly on my sisterâ€™s piano several years ago (the same Chickering once owned by our grandmother), is learning to play as rapidly as I can teach her. I call her inherent talent the â€œJuilliard Gift,â€ after my aunt who earned a Masterâ€™s degree in violin performance from Juilliard in the mid-40â€™s (playing her own Stradivarius), and my other aunt whose natural brilliance at the piano launched her career in composition and university instruction before she had time to consider a Juilliard curriculum.
For that matter the piano now sitting in our parlor is, in and of itself, a Juilliard Gift. Indeed,
â€œPaul Lindeblad has done this perfectly!â€ My deepest thanks for tireless energy and superlative sensibilities expended on my breathtaking instrument as well as every other he touches.
Sincerely,
â€¨Cynthia Alcott Urich